Over 18 years old, not students.

From 18 to 25 years old with current student ID.

All you need to know

From Monday to Sunday

Summer (From April to October)

Winter (From November to March)

Seville City Center the next day.

Summer (From April to October)

Winter (From November to March)

What will we do?

An unforgettable tour through of Doñana National Park. The most emblematic protected natural area of ​​Andalusia with almost 150,000 hectares.

A tour, in two days, with departure and arrival in Seville. You will enjoy all its ecosystems and the village of El Rocío.

The northern and southern areas of the National Park will be visited entirely in a 4 × 4 company vehicle and accompaned by our tour guide.

We will start the trip through Coria del Río, entering the rice paddies that are the door to the marshes of the Guadalquivir river. During this part of the road you will be able to observe different types of birds in their natural habitat.

We speak of specimens such as the morito, the imperial eagle, the bee-eater, the flamingos and different types of herons among the more than 300 species that inhabit this enclave.

After the marshes we will continue the route through the northern part of the National Park. We will cross the Coto del Rey, a former royal hunting area. Nowadays it is the forest lung of the park and the place where large mammals and the Iberian lynx take refuge.

There may be the possibility of seeing deers, wild boars, fallow deers and even the endangered Iberian lynx. After this we will return to the village of El Rocío where we will learn the peculiarities of its surroundings and customs.

For nature lovers, the next day we will tour on foot and we will see the Black Mountain and La Rocina stream.

The first day will end by the sea, next to the fossil cliff of Asperillo. If the weather is favorable, and if you want to, you could get in the ocean.

The next day we will go to Acebuche visitors center of the National Park after our breakfast to make a 4-hour route. We will cross the largest dune system in our country until we reach the of the river Guadalquivir mouth in front of Sanlúcar de Barrameda. We will enjoy everthing the south part of this ecosystem will offer us: the beach, the marshes and the river shore.

In the afternoon we will make our last stop at El Rocío and then return to Seville where our two-day tour of the Doñana National Park will end.

Some images of what you'll see

We use cookies to offer a personalized experience to our users. 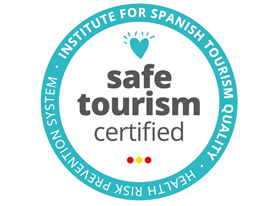